I want to talk to you about this man, here - 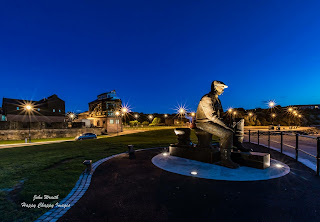 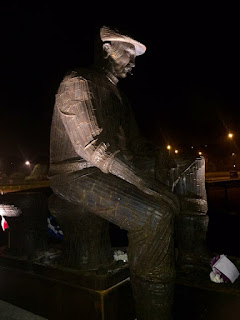 Thank you John Wraith and Gillian Blamire for these beautiful photographs.

I grew up with the North Sea to the east of me and the River Tyne to the south. North Shields Fish Quay was where my grandfather used to go in the early decades of the twentieth century to buy fish fresh from the boats. It was also where his sister famously hit him across the face with a haddock. There were always bright little boats, and wooden crates piled with shining fish and ice. There were screaming gulls, men in oilskins, and, after the middle of the morning, the smell of disinfectant when everything had been scrubbed down.


Fishing is one of the most dangerous occupations going, and the harshest. Imagine ice in the marrow of your bones and your hands too cold to feel, sleet spray in your face with teeth that bite to your heart, and the unrelenting, muscle-wrenching graft. The ganzies (sweaters) those men were had to be knitted with the thickest wool on the thinnest needles, an almost impossible task, to make them as dense and warm as possible. The other thing about the ganzies is that the different fishing villages had their own designs. if a man was lost at sea and washed up on the coast, the locals could find out where he came from by the design on his sweater. Tough as hawsers, those men.

It happens rarely these days, but it happens, that a boat comes back without a full crew. Every fishing town and village has its stories about fishermen lost at sea.

A year or two back, some inspired people in North shields and thereabouts decided that there should be a memorial to the fishermen lost at sea, a tribute to them and a focus point for those whose men never came home. This year, Fiddler's Green was unveiled. 'Fiddlers Green', they say, is the place where fishermen go when they die, a kind of fishermen's heaven.

So here he is, sitting on the Fish Quay be the Tune with his boots, his ganzy, his cap, and a ciggie in his mouth. His face is weathered. He is part of our story.

Posted by margaret mcallister at 11:48