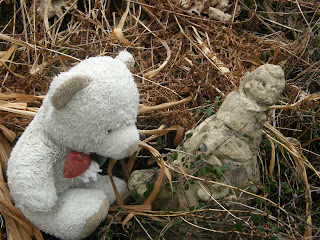 I know you're all very interested in the Senior Bear here at The House of Stories, so here he is in conversation with Much the Gnome. These days his fur is thinning so he usually wears a sweater or one of his very smart waistcoats.

Hamilton came to live with us one Christmas many years ago. The local supermarket were selling bears with very sweet feet over Chritmas, and for the first time we had a little leeway in the budget. Just a little, mind. Not enough to buy a bear just because you like the look of it. Then after Christmas the remaining bears were on special offer, so they were all special bears, and we bought the one who was hiding behind the coffee jars so that nobody could find him but us. My magazine serial had just been published, and the name 'Hamilton' came from that.

Hamilton proved to be very cuddly and also amazingly acrobatic. That first night he explained that he didn't want to live upstairs in somebody's bedroom, he wanted to be a downstairs bear at the heart of the family. He has been at the heart of the family ever since, and mentors the newer bears. He runs an underground railway for the rescuing of distressed bears who have been abandoned or ill-treated. I have it on good authority that he can fly. He likes football, but only if he can watch it in company. He looks after my hats, comes with us on holiday, has a starring role in important family events, carried the rings at Daughter's wedding, reads, and has been known to roll over thumping the floor laughing and jump out from behind doors. He is a consoling bear. At twenty years old, he has no plans to retire.

He is as snowy white as the day he came to us. Anybody who thinks he's a bit grey and worn is... well, that gets either a hard stare or a roll on the floor laughing, depending on his frame of mind.

BTW, I know those of you from Over The Pond rely on this blog to find out what's happening in Ambridge. It turns out that it was the late Nic Grundy who hit Matt Crawford. It was an accident, and when she went back she couldn't find him. She probably assumed he'd crawled under a stone somewhere. Shula has left Alistair because she doesn't love him any more. No, I wasn't convinced either. Jill Archer's cross. Emma's on default grumpy setting. Brian's family forced him to step down from running the farm, so he's got more time to wind everyone up. Oh, and Alice was drunk at Nic's funeral. I hope that's all clear.
Posted by margaret mcallister at 03:02 No comments:

A Bear of Very Little Brain

If you think Pooh Bear is a small podgy American in a red top that doesn't fit him, you are sadly misled. He was originally called Edward Bear, but he wanted 'an exciting name all to himself' so he became Winnie-the-Pooh. Winnie was after a bear in London Zoo, and Pooh was something you could say to your favourite swan if he was ignoring you. He is soft enough to take to bed and stout enough to get stuck in Rabbit's doorway. He's not afraid of Heffalumps or Expotitions as long as Christopher Robin is with him. He is a faithful friend to Piglet and has very good manners, which makes it awkward if you think it's time for a Little Something but you don't like to ask.

Piglet understands about Pooh. When Piglet is surrounded by water in the floods, he wishes he had Pooh there. 'Pooh hasn't much Brain, but he never comes to any harm. He does silly things and they turn out right.' And in this crisis, Pooh has quite brilliant ideas. He floats away on a boat to find Christopher Robin. The boat is a jam jar - 'Sometimes it's a Boat and sometimes it's more of an Accident. It all depends.' 'Depends on what?' asks Christopher Robin. 'On whether I'm on top of it or underneath it.' He also has the quite wonderful idea of turning Christopher Robin's umbrella into a boat, and they float off together to rescue Piglet.

He is also a poet, tiddly pom. 'It's a very funny thought that, if Bears were Bees/They'd build their nests at the bottom of trees/And that being so (if the Bees were Bears)/We shouldn't have to climb up all those stairs.' That's a Complaining Song, because it's not easy for a short and stout person to climb a tree all the way to a bees' nest in search of hunny.

Orl cwotashuns are from Winnie-the-Pooh by A A Milne.

Posted by margaret mcallister at 09:54 No comments:

Back to the House of Stories. With Bears

I am still alive. Hello.

I didn't get to spend much time at The House of Stories earlier this year, what with family stuff. (I have a new grandson. If he were any cuter he'd be a kitten.) Then I gave up social media for Lent so I thought the blog may as well go into hibernation, too, and I didn't know whether to wake it up. The new book is Fifteen Things Not To Do With A Puppy and is doing very well, but you knew that, didn't you?

Then, yesterday, we - that's Tony, Hamilton Bear and I - were watching some quiz programmes. Hamilton's favourite is University Challenge, and after it he commented that there weren't enough questions about bears on there. The bear has a point. So Hamilton and I are going to do a bit of Bear Blogging. (For all those of you who just said 'Bare Blogging' and thought it was hilarious, Hamilton is giving you a hard stare. And in this weather?)

Let's start with that Bear of Bears, Paddington. Michael Bond saw a lonely little bear on a shelf on Christmas Eve, bought it for his wife and found that there was a story in this bear. It was eleven years after the end of the war, when it was quite usual to see children with suitcases and labels round their necks on London stations. The British ones were evaccuees, the others were refugees, all needed the kindness of strangers like the welcoming Brown family. Paddington waits quietly for someone to look after this bear, confident that someone would. Michael Bond would say later that Paddington wasn't a teddy bear, he was a bear. He had, he said, 'the naivety of a child and the sophistication of an adult'. To me, he has a kind of holy innocence that protects him in spite of whatever comes his way.

What's so great about Paddington, I mean, apart from the hat, the coat, the wellies, the marmalade sandwiches? He believes that everything can be dealt with using good manners and the only weapon he ever uses is the Hard Stare. He raises his hat. He gets into all sorts of difficulties to do with buns, hot baths, and trips to the theatre, but he keeps calm and carries on. Come to think of it, Paddington Bear is a role model. Be More Paddington.
Posted by margaret mcallister at 06:15 No comments: